Plants vs. Zombies Wiki
Register
Don't have an account?
Sign In
Advertisement
in: China exclusive, Archived, Zombies,
and 7 more
English

Shoots arrows to the first plant he encounters.

Archer Zombie (弓箭僵尸; pinyin: gōngjiàn jiāngshī) was a zombie in Plants vs. Zombies Online. He appeared in Qin Shi Huang Mausoleum. Archer Zombie would walk onto the lawn and target the first plant he encountered. If there were not any plants in his lane, he would move like a normal zombie. His attacks dealt two bites of damage and he had the same health as a regular zombie. Additionally, he sometimes shot fire arrows which would have instantly burnt the target.

Shoots arrows to the first plant he encounters.

Fires 3 fire arrows that deals heavy damage to the back 3 plants. 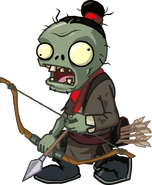 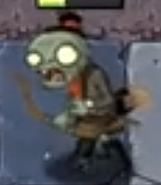 Some Archer Zombies in Ancient Egypt (Endless mode only)