Rare
On July 17th, 1893 he discovered the first ever complete Chomposaurus Rex skeleton. On July 18th he forgot where he left it.

On July 17th, 1893 he discovered the first ever complete Chomposaurus Rex skeleton. On July 18th he forgot where he left it.

His close-range Excavator fires gold, gems and all sorts of valuable artifacts.

The Primary Weapon of the Archaeologist is the Excavator. It has a larger clip size (which is 12 ammo by default and 15 when upgraded), a faster fire rate and longer range but deals remarkably less damage. It will also make loud noises, which can be easily detected by the plants.

The Excavator has a bizarre damage profile, dealing 12-15 damage at mid and long range, about 15-22 damage at close range and about 27-33-49-51 damage at extreme close range.

This mysterious relic of zombie history has made reloading even faster.

He is now filling his treasure bucket to the brim, increasing his ammo.

An amazing new discovery: Smashing the treasure into broken bits has improved his damage. 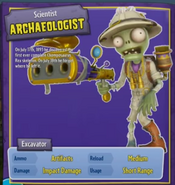 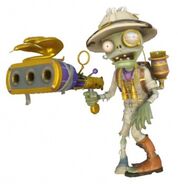 Archaeologist with Sky Trooper, Landscaper and Wrestling Star in Zomboss Down Pack trailer 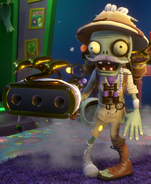 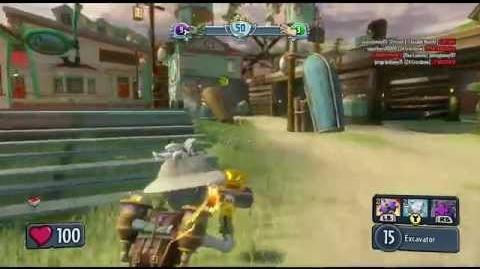