Special
​Rose alters her magic slightly, allowing her to transform into a being of pure healing.
Arcane Lotus is an alternate ability for the Rose's Arcane Enigma in Plants vs. Zombies: Garden Warfare 2. This ability, like Arcane Enigma, makes Rose become invincible for an amount of time, but Arcane Lotus lasts somewhat shorter than its original version. Also, this ability cannot damage zombies, but instead heals the Rose using it for 35 health, while also healing nearby allies for 4 health gradually. Can be temporarily purchased at Rux's Bazaar for 500,000 coins.

​Rose alters her magic slightly, allowing her to transform into a being of pure healing.

Arcane Lotus is an ability for Roses that stay inside the plant base, or are usually grouped with teammates. If there is not a Sunflower on the plant team, this ability can slightly replace that. While it does not last as long, it can still be a good healing option after large attacks on the plant base like a Parrot Pal's Eggsplosion. Modes like Turf Takeover, Gnome Bomb, and Suburbination are all great ways of incorporating Arcane Lotus, as sticking with teammates is common in those modes.

While you are still invincible, this ability doesn't last very long, so using this as a last resort to get out of tough situations will be harder, at the expense of helping your teammates out of that same situation.

Teaming up with a Sunflower can be a great idea with this. They can constantly heal you, and when they are low, using this ability can save their life.

Against Arcane Lotus, try aiming for them near teammates if you know they have this ability, as it could make it so teammates around them can easily vanquish you. However, remember that Sunflowers and rooted plants are more top priority, as they can heal teammates faster or vanquish you easily. If possible, stay as far away from the Rose as possible, as Roses don't hit very hard at long range, as well as the fact other plant teammates will not be near you to attack you efficiently. 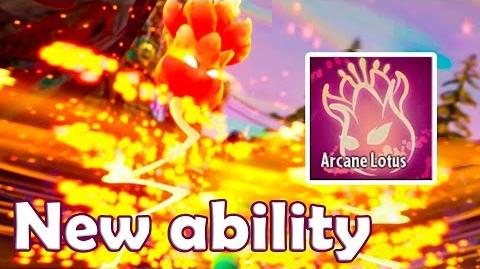