For the version in Plants vs. Zombies: Battle for Neighborville, see Arcane Enigma.

N/A
Only Rose could make transforming into a being of pure, invulnerable, damage-dealing energy seem so easy.
Arcane Enigma is the second ability for Rose in Plants vs. Zombies: Garden Warfare 2. The ability is similar to the Scientist's Energy Warp, making Rose immune to most damage but allowing her to travel faster. It can also be used to deal area damage pulses, dealing 20 damage, at the cost of 25% of the energy bar. Arcane Enigma has approximately one second cast time. Its alternate ability is the Arcane Lotus.

Only Rose could make transforming into a being of pure, invulnerable, damage-dealing energy seem so easy.

Arcane Enigma is a good way to protect yourself from incoming damage and destroy your offenders at the same time. However, its duration is rather short, and its damage isn't that amazing. It does allow you to sneak in the zombies' graveyards or to sneak up on a zombie to vanquish them. It can also avoid damage from fire and toxic character variants and allow you to destroy any Proximity Sonic Mines in your way.

Arcane Enigma makes Rose invincible, so try to run away from her when she activates it. If Rose is about to unleash energy pulses, use Rocket Leap, Rocket Jump, Warp, or jump as Super Brainz to avoid her energy pulses. 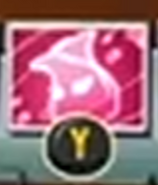