Arcade machines are environment modifiers and lawn obstacles found in Neon Mixtape Tour in Plants vs. Zombies 2. They are pushed across the lawn by Arcade Zombies. Like frozen blocks, arcade machines can crush all plants when pushed, including instant-use and boosted plants. When the 8-bit jam plays, they spawn different variants of 8-Bit Zombies.

Spore-shroom on an arcade machine (glitch)

Tip about planting on an arcade machine

Arcade machine on a speaker 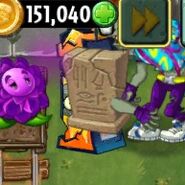 Retrieved from "https://plantsvszombies.fandom.com/wiki/Arcade_machine?oldid=2351437"
Community content is available under CC-BY-SA unless otherwise noted.