Pushes an arcade cabinet that spits out 8-Bit Zombies.

(can attack both machine and zombie)

(attacks Arcade Zombie from behind)

(can divert the zombie away from his arcade machine)

(flings the Arcade Zombie away from his machine, preventing him from pushing it)

(separates Arcade Zombie from his machine)

Neon Mixtape Tour - Day 19
When it's a choice between quarters for games and quarters for laundry, Arcade Zombie is prepared to make the ultimate stinky sacrifice.

Arcade Zombie is a zombie encountered in Neon Mixtape Tour in Plants vs. Zombies 2. It pushes an arcade machine in a manner similar to Troglobite pushing frozen blocks. During the 8-bit jam, the arcade machines will start spawning 8-Bit Zombies, which are 8-bit variants of Basic, Conehead, and Buckethead Zombies.

It was first revealed in the Neon Mixtape Tour Side B developer diary released on September 15, 2015.

The Arcade Zombie borrows the same body model, idle, moving, eating, and dying animation from Octo Zombie, Troglobite, Jurassic Bully, Jurassic Rockpuncher and Zombie Medusa, which all reuse the same animations. Its get up consists of a very messy hairstyle colored in red. In addition, it wears eyeglasses with a twist-tie. Its shirt consists of a colorful design with light blue as the primary color of the attire only to be paired up with yellow and pink designs respectively. The sleeves and bottom of the shirt are ragged. The linings on the neck and edge portion of the sleeves are all colored in dark blue, matching the gloves and jumper shorts that he wears except the suspenders of the jumper shorts are colored in magenta. It also wears a yellow belt with a green pouch. Finally, its footwear consists of white rubber shoes with blue designs and green socks.

Pushes an arcade cabinet that spits out 8-Bit Zombies.

When it's a choice between quarters for games and quarters for laundry, Arcade Zombie is prepared to make the ultimate stinky sacrifice.

Unlike most zombies in Neon Mixtape Tour, the Arcade Zombie can pose more of a threat than a Basic Zombie even when its jam is not playing - he can crush plants with his arcade machine, plus it blocks straight-shooting projectiles. The real problem, however, is when the jam does play, as the arcade machine is able to spawn 8-Bit Zombies in endless quantities, which pose a great threat of overwhelming your defenses. It is important to note that you should try to destroy its arcade machine as quickly as possible. 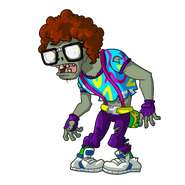 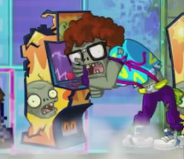 A glitched Arcade Zombie that has stopped walking. Notice the lack of an Arcade Machine to push 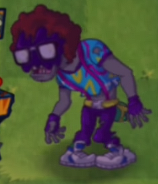 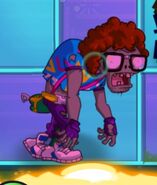 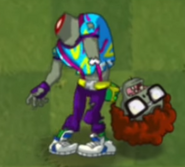 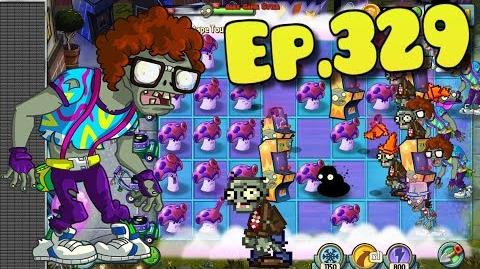