Creates an invisible light that makes zombies behind him invisible.

Accompanied by the construction of the Sky City, Dr. Zomboss spent a large sum of his money to import Arbiter Planes. After three days and 3 nights of experiments and his hair burnt 10 times by strong electricity, The Arbiter-X is invented! Yes, a mysterious plane that intrigues countless zombies. It is said that it can give the Zombies the feeling of long-lost safety.

Arbiter-X (仲裁者-X型; pinyin: zhòngcái zhě-X xíng) is the eleventh zombie encountered in Sky City in the Chinese version of Plants vs. Zombies 2. It takes up three lanes, makes zombies around it and all zombies in all lanes behind it semi-transparent, making them unable to be seen or hit by plants, but unlike Bandit Zombie, they can still be seen by the player. Additionally, when it reaches the player's ship, it will kamikaze it. This will destroy the zombie itself, the plants in the third column, and deal huge damage to the player's house.

Its name and ability bears a strong resemblance to Protoss Arbiter, a judicator-class support unit from Starcraft.

This is much like Glitter Zombie, except that he has much more health, does not require a jam to use its ability, and also protects all zombies around him from plants' sight as well as behind himself. A Lantern Cherry will enable the hidden zombies to be visible to plants so they can attack them, but seed slots are usually too valuable for this and there are no area-of-effect aerial plants, so it would not help much. Additionally, the Arbiter-X does not hide itself and can still be attacked when his force field is intact. Level 2 Kiwifruits can destroy it easily. Saucer Squash can be used, as it will stop the Arbiter-X from moving temporarily, allowing the other zombies behind to go in front of him, eventually making them vulnerable to the other plants' attacks.

Take note that Caulipower's projectile will only damage it instead of hypnotizing them. Also, the Arbiter-X will deal massive damage to the illusion zombies as well as the hypnotized ones.

An Arbiter-X will appear as the final boss of the Air Raid Brain Buster, and will be first accompanied by Buckethead Pilot Zombie and Conehead Pilot Zombie. Destroy them as fast as possible as they will make the fight more dangerous. While he seems easy at first, once he reaches half health, he will start to throw bullet patterns that have narrower gaps between them to escape through than your plane can fit. This will be virtually impossible if the player is low on health. If the player does not defeat him as fast as possible, he will cause the player to spend countless gems on continues or retry the entire level. 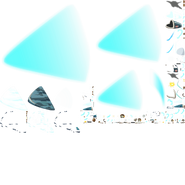 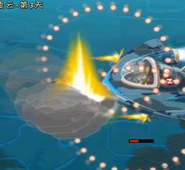 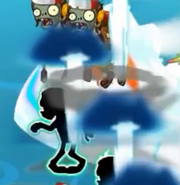 A defeated Arbiter-X, about to be destroyed 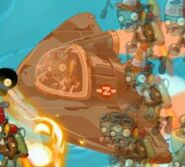 An Arbiter-X burnt by an upgraded Wasabi Whip

Arbiter-X being attacked by the laser cannon in One Gun Guard.

Arbiter-X being damaged by the player in One Gun Guard with the homing cannon. 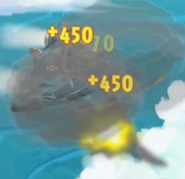 Two Arbiter-Xs getting destroyed by the player in One Gun Guard.

Retrieved from "https://plantsvszombies.fandom.com/wiki/Arbiter-X?oldid=2375205"
Community content is available under CC-BY-SA unless otherwise noted.