When played: If you made at least 6

this turn, this gets

Strikethrough.
Watchful Quasar Wizards sometimes spot an Unidentified Fruiting Object.
Apple-Saucer is a galactic uncommon plant card in Plants vs. Zombies Heroes and a member of the

It does not have any traits, and its ability gives it the

Strikethrough trait if 6 or more sun was made on the turn it is played.

It is based on the apple (Malus pumila), a sweet, pomaceous fruit of the genus Malus cultivated worldwide; and an unidentified flying object (or UFO for short), a term used to describe any object in the sky that is not identifiable as a known object or phenomenon. Its description calls Apple-Saucer an Unidentified Fruiting Object, referencing the fact that the apple is a fruit.

Its name is a portmanteau of "apple sauce," a sweet sauce made mainly out of apples, referring to the projectiles it uses and the result of its destruction; and "flying saucer," referring to its appearance.

Apple-Saucer is quite glassy for a 2-cost card. It has the same stats as Fire Peashooter, except it can't synergize with any plant due to the lack of fruit synergy cards.

However, Apple-Saucer's strength lies in its late-game ability. Once you make 6 sun, Apple-Saucer becomes a nuisance for your opponent, as it will gain

Strikethrough upon being played. It is recommended to use plenty of plants that give extra sun if you want to make full use of this card.

Unfortunately, Apple-Saucer's poor health means that it will not stay long in the late game, often going down after attacking only once unless protected by a Team-Up plant or boosted, but there are better

Strikethrough plants to do that by that time. But still, you can at least swarm many of them due to its cheap cost.

Strikethrough in Venus Flytraplanet can result in double the healing if a zombie is also on its lane as it damages both the zombie and the zombie hero, but as mentioned before, its low health proves this strategy very risky. Another option is Planet of the Grapes for easy and mostly guaranteed card draw, but only Rose can do this.

Just keep in mind that Hearty heroes may have Ra Zombie or Turquoise Skull Zombie to prevent you from giving it Strikethrough once you reach turn 6.

While it has mundane stats for its cost, Apple-Saucer can destroy most of your essential zombies fairly quickly, especially if played when your opponent has made 6 sun or more. Its strength stat of 3 means it cannot be destroyed by Weed Spray, Rolling Stone, or Rocket Science. Fortunately, it only has 2

, so if you are playing as a

Crazy hero, Bungee Plumber or The Chickening should do the job in destroying Apple-Saucer.

Strikethrough when played by the time your opponent has made 6

or more, it can prove a tough plant to deal with.

Hearty heroes can destroy it instantly with Knockout, or reduce its strength if Knockout isn't available.

They can also play Ra Zombie and Turquoise Skull Zombie to prevent it from getting Strikethrough once they reach turn 6.

Beastly heroes can weaken Apple-Saucer with Nibble or Total Eclipse, or outright destroy it with instant-kill tricks such as B-flat and Locust Swarm, although it isn't usually worth playing such expensive cards on Apple-Saucer.

Freeze Apple-Saucer to prevent it from doing heavy damage. But since Apple-Saucer will be played later on in the game where more powerful cards can also be played, it may be better to take its attack instead if there are bigger threats that need to be prioritized, unless you are playing mass-damaging/destroying cards to deal with Apple-Saucer. 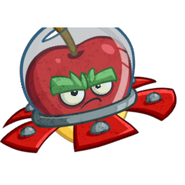 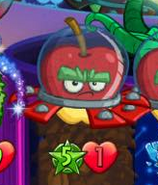 Apple-Saucer with a star icon on its strength 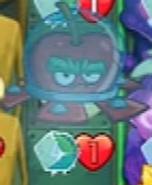 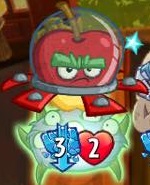 Alien Ooze being played on Apple-Saucer

Apple-Saucer on the background of the Galactic Gardens battlefield

Apple-Saucer on the advertisement for the Back To School Sale, along with Zombology Teacher