When played: Conjure a Root. Dino-Roar: This gets +1

.
Some potatoes are sweet. Others are dinosaurs.
Apotatosaurus is a triassic legendary plant card in Plants vs. Zombies Heroes and a member of the

Untrickable trait, and its ability Conjures a root when it is played, while its Dino-Roar ability gives it +1

It is based on the potato (Solanum tuberosum), the starchy, tuberous root portion crop of a perennial nightshade; and the Apatosaurus, a genus of sauropod dinosaurs that lived in North America during the Late Jurassic period.

Its flavor text loosely referencing Sweet Potato could be a leftover reference to its old ability during development, where it Conjured a Sweet Potato instead of simply any root card.

Some potatoes are sweet. Others are dinosaurs.

Apotatosaurus is an extremely powerful plant. It has average stats for its cost (including the boost from its "When played" ability), but the fact still stands that these stats are very high. Apotatosaurus' value comes from its

Untrickable trait, meaning that it cannot be stopped by tricks such as Rocket Science or Exploding Fruitcake, and must be dealt with directly. The root Conjured can also be something threatening, such as Soul Patch, Veloci-Radish Hunter, or even another Apotatosaurus, but isn't to be relied upon.

Each Mega-Grow hero has their own way of using Apotatosaurus:

However, Apotatosaurus is weak against several combos.

Deadly zombies by themselves are one, especially when your opponent makes them do bonus attacks. Zombot Sharktronic Sub combined with any zombie or environment with a damaging ability is another. (Any

But the most threatening zombie is Primordial Cheese Shover, as he can be played to instantly get rid of Apotatosaurus with his Evolution ability, and you can't do anything about it either. Fortunately, under normal circumstances that zombie is only accessible to Beastly heroes.

Do not leave this plant unattended for long, as it can easily wreak havoc on you and your zombies. A 6

plant that boosts itself every turn and is also immune to all tricks is definitely not something to be trifled with. The best option, like against most powerful cards, would be to win the game before Apotatosaurus can grow out of hand, or even be played. Quickdraw Con Man would not help due to his nature as an early-game play either.

If you have to destroy Apotatosaurus, do it before it grows out of hand, or use zombies that can instantly destroy any plant since it is immune to tricks. Sneaky heroes can destroy it in one blow, regardless of health, using

Deadly zombies or Zombot Sharktronic Sub, while powerhouses like Copter Commando can also deal with this instantly, provided Apotatosaurus is not boosted any further beyond 6

A good counter is Primordial Cheese Shover, as his ability can counter untrickable plants. However, he needs to be evolved first to activate this ability, and he is only accessible to Beastly heroes.

As a Sneaky hero, try and Bounce this with Pogo Bouncer or Blowgun Imp, however keep in mind this is only a temporary solution, as Apotatosaurus can easily be played again afterward to conjure another root. Blowgun Imp is also better used to destroy Apotatosaurus directly instead, as he has the Deadly trait. 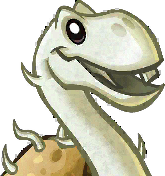 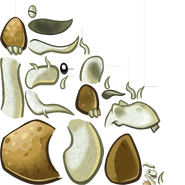 Apotatosaurus with a star icon on its health

Root Wall being played on Apotatosaurus