For the modern-day variant, see Vimpire.

When any Zombie with

Frenzy destroys a Plant, that Zombie gets +2

.
Vimpirism - an ancient curse evolved from the dawn of time.
Ancient Vimpire (Metallicized version) is a colossal super-rare zombie card in Plants vs. Zombies Heroes and a member of the

. It has the Amphibious and

Frenzy traits, and its ability gives any zombie with the

Frenzy trait, including it, +2

when that zombie destroys a plant and survives. This ability stacks with each Ancient Vimpire on the field and persists until all Ancient Vimpires are removed from the field.

Vimpirism - an ancient curse evolved from the dawn of time.

Ancient Vimpire is a very powerful zombie. Not only does it have greater stats than a normal Vimpire and the Amphibious trait, but Ancient Vimpire gives +2

Being a member of the Beastly class, Ancient Vimpire's has synergy with Gargantuar decks with Smashing Gargantuar and

Frenzy cards such as Maniacal Laugh and Area 22.

Frenzy zombies, such as Wannabe Hero, and tricks which give fighters

Frenzy, such as Going Viral. A deadly combo is using this along with Coffee Zombie as he will give all zombies

Frenzy, making it much easier to activate Ancient Vimpire's ability and thus, resulting in great damage to your opponent

Note that Ancient Vimpire will give boosts to zombies with

Frenzy if they destroy a plant in any way, not just by attacking. An example of such a combo is playing Zombot 1000 with Smashing Gargantuar on the field, giving it +2

for each plant it destroys. With extremely high stats and the

Frenzy trait, it will be very unlikely for your opponent to stop it without hard removal.

Since it has a very dangerous ability, your opponent is most likely going to prioritize destroying it. You can either have it in the Zombie Tricks Phase via Teleport and Teleportation Zombie as Immorticia, Graveyard as Brain Freeze, or protect it from tricks with Parasol Zombie.

However, just like Vimpire, it will be instantly destroyed if it attacks Garlic, so either destroy Garlic, or avoid playing Ancient Vimpire on the lane with him. It is also recommended to Bounce or move Garlic out of Ancient Vimpire's lane, or move Ancient Vimpire out of Garlic's lane.

Taking out Ancient Vimpire should be a priority. Much like a normal Vimpire, just destroying one plant can already give the zombie a huge boost. The simple fact that Ancient Vimpire's ability works with any and all

There are not many early-to-mid game options to deal with this zombie if it is played on the water lane other than Guacodile, so it is recommended to play tricks instead. Due to its natural 3

, it is vulnerable to Whack-a-Zombie while unboosted. Shamrocket or Squash can dispose of it before other

Frenzy zombies get boosted, and Doom-Shroom or The Great Zucchini can help handle the situation if there are too many tough zombies for you to handle.

Frenzy zombies, rendering Ancient Vimpire's ability useless. However, you will need great resources and powerful tempo from the start to use this strategy.

You could also Bounce Ancient Vimpire so it does not boost

Frenzy zombies. This won't deter the opponent from playing him in the next turn, so beware.

You can also play Garlic on the lane with Ancient Vimpire so it will instantly be destroyed if it hurts him, but be careful as the zombie hero may have cards to help Ancient Vimpire survive, so use this strategy only when you are very sure that the opponent can't do anything to it. 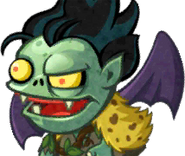 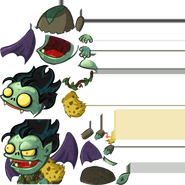 Ancient Vimpire activating its ability on itself

Ancient Vimpire being the featured card in the menu for the January 3rd, 2018 Daily Challenge 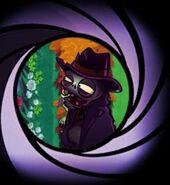 Ancient Vimpire with a star icon on its health