For the international version of this level, see Ancient Egypt - Day 25.

Three (at the start)

Ancient Egypt - Ultimate Challenge is the 15th and the last level of Ancient Egypt in the Chinese version of Plants vs. Zombies 2. In this level, the player must defeat the Zombot Sphinx-inator. When this level is finished for the first time, the player earns coins, a Magical Chest and a star.

(Dr. Zomboss appears)
Dr. Zomboss: Have you ever wondered why your neighbor David hungers so?
Dr. Zomboss: What secret ingredient in the taco would drive his desire?
Dr. Zomboss: Could it be that he needs your brains as much as we do?
(Dr. Zomboss leaves, Crazy Dave appears)
Crazy Dave: Wha-?! No way. I would never eat a brain taco!
Crazy Dave: But, I don't remember what was in it...
(Crazy Dave leaves)

(After obtaining the prize)
Penny: I found a map of Space-time-ness, it can unlock one of the worlds.
Crazy Dave: I'd choose the one with lesser chillis!
(After the player selects a world)
Penny: Beware! Every time you unlock a world, the star requirement for locked worlds will increase! 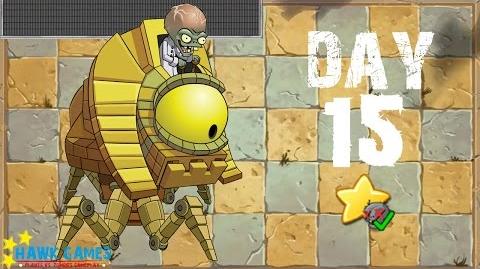 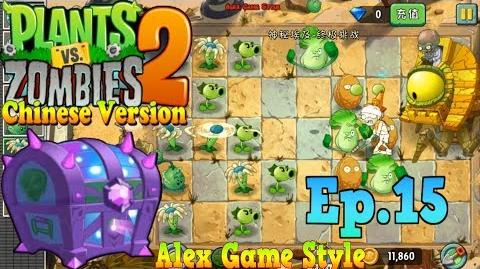 Retrieved from "https://plantsvszombies.fandom.com/wiki/Ancient_Egypt_-_Ultimate_Challenge?oldid=2375142"
Community content is available under CC-BY-SA unless otherwise noted.