Out of 1000 points, letting a zombie trample the flowers will subtract the player an amount of points

The less Wall-nuts used, the more points the player will have

Many targets hit with one single Wall-nut will increase the player an amount of points
Level 2-4-3 was the first Advanced level of Ancient Egypt in Plants vs. Zombies Online. It was a "Wall-nut Bowling" level, in which the player would play a Wall-nut Bowling level and get their points subtracted if a zombie trampled the flowers or when the player used the Wall-nuts, and get their points increased when they would hit many targets at once with a single Wall-nut. The player could only plant to the left of the flowers. The player would have been ranked with other online players by points and the 1st, 2nd and 3rd ranked players would get huge prizes weekly.

Playing the level
Add a photo to this gallery 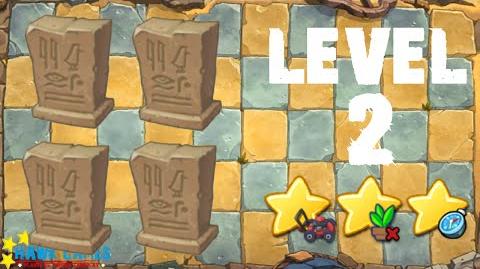 Plants vs. Zombies Online - Ancient Egypt - Challenge Level 2
Add a photo to this gallery
Retrieved from "https://plantsvszombies.fandom.com/wiki/Ancient_Egypt_-_Level_4-3/Advanced?oldid=2181625"
Community content is available under CC-BY-SA unless otherwise noted.