A money bag
Ancient Egypt - Day 7 is the seventh level of Ancient Egypt in Plants vs. Zombies 2. After completing this level, the player receives a money bag.

The level is very simillar to Ancient Egypt - Day 6 in terms of zombies, but this time there are Buckethead Mummies instead of Conehead Mummies. To defeat those Bucketheads, the player can use Potato Mines, which will destroy them instantly upon contact. To defeat the Camel Zombies, the player should use the Bloomerang, of which's boomerangs will hit all three zombies in one camouflage. This level should not be hard for new players. 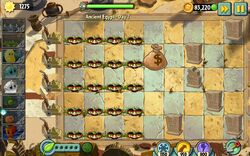 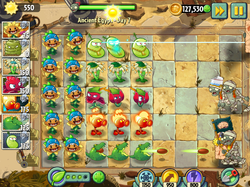 Retrieved from "https://plantsvszombies.fandom.com/wiki/Ancient_Egypt_-_Day_7?oldid=2354872"
Community content is available under CC-BY-SA unless otherwise noted.