Survive by using Power Ups
Ancient Egypt - Day 5 is the fifth level of Ancient Egypt in Plants vs. Zombies 2. When this level is finished for the first time, the player unlocks the Iceberg Lettuce.

The player learns how to use three kinds of Power Ups obtained after beating Ancient Egypt - Day 4: Power Snow, Power Toss and Power Zap; Prior to the 1.9 update, Power Pinch was in place of Power Snow. The player must kill all zombies using Power Ups to complete this level.

(Penny appears)
Penny: You have some Power Ups! I'll show you how to use them.
(Crazy Dave appears)
Crazy Dave: Yeah, and now we can break the seal. Let's get crazy!
(Crazy Dave and Penny leave)
(After beating the level and getting the Iceberg Lettuce)
Crazy Dave: Want to open more Piñatas? Check out the Store!
(After pressing the Store)
Penny: The Ancient Egypt piñata might have what we're looking for. Take these gems and buy one!
(After buying the piñata and returning to the map)
Penny: Want more piñatas? Complete Travel Log's quests before time is up. New quests show up every day!

This level introduces the player to Power Ups. These can easily whittle down the zombie horde due to their extremely strong effects. The player also gets to use these infinitely throughout the whole level. Because of their power, the player should have no worries about losing the level at all. 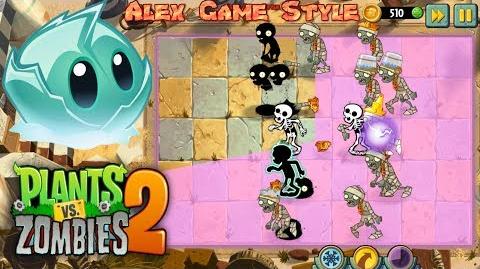 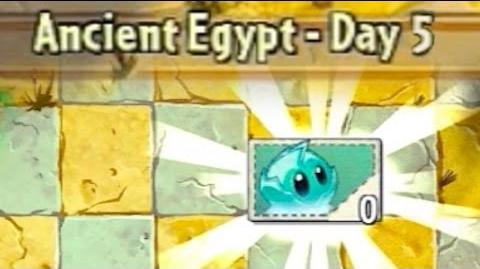 Ancient Egypt Day 5 - Walkthrough
Add a photo to this gallery

Retrieved from "https://plantsvszombies.fandom.com/wiki/Ancient_Egypt_-_Day_5?oldid=2292641"
Community content is available under CC-BY-SA unless otherwise noted.