A money bag
Ancient Egypt - Day 2 is the second level of Ancient Egypt in Plants vs. Zombies 2. When this level is finished for the first time, the player unlocks Bloomerang.

If my systems f-f-f-freeze up, we could be stuck here forever!
This has content that has been changed in the latest updates, making the information no longer correct. Please update it, or the zombies will eat your brains!

This level is very similar to Day 1, but it comes with the added threat of the Buckethead Mummy. While this causes the difficulty to slightly increase, Plant Food is introduced in this level and shows off an easy way to defeat the Buckethead Mummy if placed on a Peashooter. The player has many opportunities to use Plant Food, so that tough zombies can be dealt with. 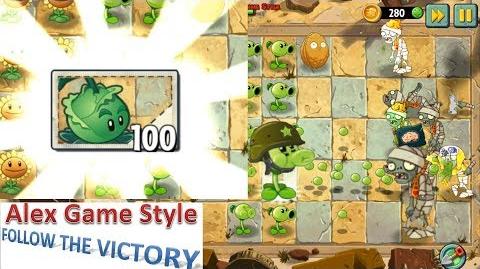