This level is the first Last Stand in Ancient Egypt and intended to be the first in the game. In this level, 2000 sun is given automatically in order to plan a defense. Two Plant Food is also given to the player at the start.

Sun producing plants and free plants are not allowed. This Last Stand level is swarmed with Camel Zombies, as well as Mummy Zombies via Sandstorm ambush. Bloomerang and any other piercing plants are ideal here, as they can easily take down the zombies mentioned above.

Since Camel Zombies appear, be sure to choose Bloomerang. You can choose Fume-shroom, Laser Bean, or Snapdragon as an alternative if unlocked. Wall-nutss are a must-have as well.

Avoid using instant use plants such as Squash, Power Lily, or Jalapeno, unless you have sun leftover for them. Kiwibeast is a great option on this level, as there are no zombies that can destroy it instantly on this level, making it a solid option. Cold Snapdragon can handle these zombies well, but it made need some support from a defensive plant, (such as Wall-nut) to handle Bucketheads in the top and bottom lanes. Electric Blueberry is good in last stands, since you can place a bunch of them at the start of the level, and watch them rain lightning on any zombie. Finally, Explode-O-Nut is a good option, as every zombie here can eat it, allowing it to potentially destroy a big group of zombies. Dartichokes can beat this level easily, have one in each lane.

Place two columns of Bloomerangs in the two leftmost columns of the lawn, and 5 Wall-nuts on the third column. This is the easiest way to get through the level if you are just getting started. If some Bucketheads managed to make it to your Bloomerangs (which they won't), use a Plant Food.

Just put a Coconut Cannon on each lane. You should be able to pass, but if Buckethead Mummy Zombies get too close, use Plant Food.

Use Plant Food when things get rough. If the zombies are still alive, shovel Pepper-pults and get partial profit. Use that sun on instant kills.

Plant Food is most likely not needed.

This strategy will make you beat the level very easily, and will easily overpower the Bucketheads and Camel Zombies.

Place as many Bloomrangs as possible. 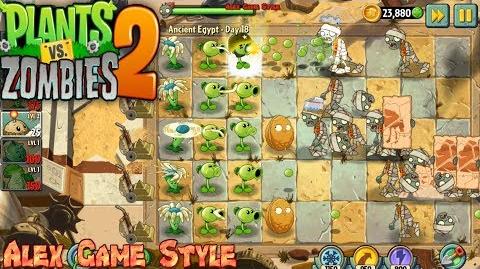 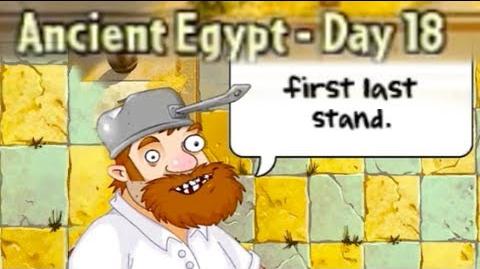 Retrieved from "https://plantsvszombies.fandom.com/wiki/Ancient_Egypt_-_Day_18?oldid=2355094"
Community content is available under CC-BY-SA unless otherwise noted.