Sandstorms, Camel Zombies, Pharaoh Zombies, and high concentration of zombie hordes contribute to the difficulty of this level. Mainly, the newly discovered Pharaoh Zombie. This zombie has a high amount of health, and once the casket is broken, the zombie within comes storming out with a fast speed. This zombie acts similarly to Newspaper Zombie, but with more health. Camel Zombies arrive in humps of more than three while Pharaoh Zombies will back themselves up by blending with the sandstorms or their allies. Instant-use plants are recommended to deal with the Camel Zombies and Pharaoh Zombies. However, prior to update 5.9.1, an instant will only break the casket, letting the zombie free without harm.

Chomper and Toadstool can instantly kill the Pharaoh Zombies, making this level much easier to manage. Kiwibeast can be used, as there are no Explorer Zombies, allowing Kiwibeast to have free reign over the opposition. Strawburst is a great option, but he needs support from defensive plants or slowing plants, such as Wall-nut or Snow Pea. 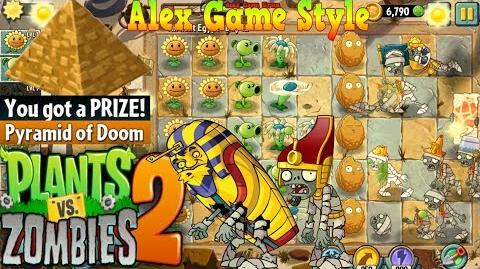 Retrieved from "https://plantsvszombies.fandom.com/wiki/Ancient_Egypt_-_Day_12?oldid=2354877"
Community content is available under CC-BY-SA unless otherwise noted.