Ancient Egypt - Day 11 is the eleventh level of Ancient Egypt in the Chinese version of Plants vs. Zombies 2. It is a Locked and Loaded level. When this level is finished for the first time, the player is rewarded with a star.

Because Bonk Choy is the only offensive plant, this level can be difficult. Wall-nuts and Iceberg Lettuces should be used to stall zombies so that the Bonk Choys can damage them. However, if both the Iceberg Lettuce and the Wall-nut are recharging, the Sunflower can be used to stall zombies for a short time due to its fast recharge and low sun cost. Grave Busters will help get rid of the tombstones summoned by Tomb Raiser Zombies. 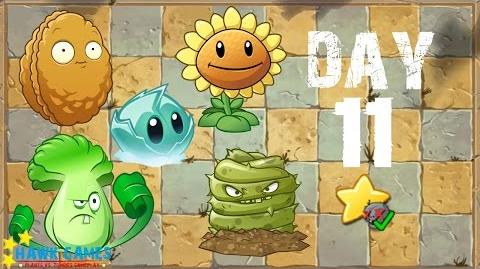 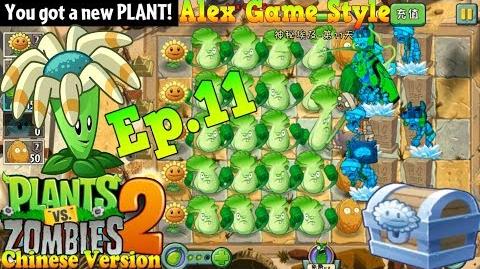 Plants vs. Zombies 2 (Chinese) Got a New Plant Bloomerang Ancient Egypt Day 11 (Ep.11)
By Alex5432000
Add a photo to this gallery
Retrieved from "https://plantsvszombies.fandom.com/wiki/Ancient_Egypt_-_Day_11_(Chinese_version)?oldid=2170922"
Community content is available under CC-BY-SA unless otherwise noted.