Ancient Egypt is the 1st world in Plants vs. Zombies 2. The player's real journey starts here and the world itself is home to a variety of mummy zombies. There are 25 levels (10 "Expansion" levels that are much more difficult also exist for this world, however they are limited time levels only accessed in the Travel Log since the 7.4 update) in this world, 7 plants to be obtained and 15 zombies to fight against.

After Day 5, the player receives a note from the zombies, showing zombies with a brain with a fork and a knife above it. A note from Dr. Zomboss is shown when the player accesses Day 6, and a World Key is awarded upon victory.

Hence being the first world of the game, the first 25 levels are not difficult.

In the 7.4.1 update, limited-time Epic Quest with 10 steps was added. It uses Ancient Egypt days 26 to 35 as equivalent of its 10 steps. A money bag is awarded after completing each step, and completing all 10 levels will give the player 100 gems. 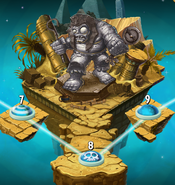 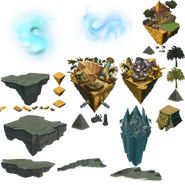 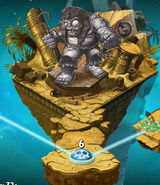 Statue indicating Gargantuar level
Add a photo to this gallery

Areas
Retrieved from "https://plantsvszombies.fandom.com/wiki/Ancient_Egypt?oldid=2229258"
Community content is available under CC-BY-SA unless otherwise noted.