For other uses, see Aloe (disambiguation).

Heals every plant on the lawn.

Aloe Vera was an Epic rarity Support plant in the pre-2021 version of Plants vs. Zombies 3. She costed 2 sun and healed plants around her in a 3x3 radius in a similar manner to Heavenly Peach. However, unlike Heavenly Peach, she was unable to heal herself.

Aloe Vera was based on the Aloe vera plant in real life, and her ability to heal other plants was a reference to how Aloe vera is used in ointments for minor burns and sunburns, in order to immediate and heal the burns.

Aloe Vera's sibling, as mentioned in her almanac entry, is Aloe from Plants vs. Zombies 2. Her Tacobility references how Aloe vera can be used as an ingredient to create gel.

Aloe Vera's Plant Food ability was named Healing Wave. When used, it would heal all plants on the lawn to full health.

Aloe Vera's Tacobility was Cooling Gel, which healed plants for more health at a time, as well as chilling all zombies that attacked any plant within Aloe Vera's healing range.

Aloe Vera was the healer for the plants, and her healing powers proved to be useful in many situations. When plants were in need of healing, she could be placed in strategic areas to heal as many plants as possible. Placing in the second and fourth rows ensured all rows are healed. 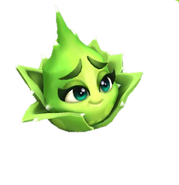