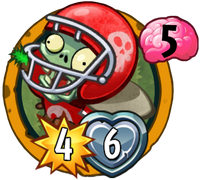 None
Gives 110% on the field. Has no idea what a football is.
All-Star Zombie is a premium super-rare zombie card in Plants vs. Zombies Heroes and a member of the

Frenzy traits and does not have any abilities.

His description is an excerpt from Football Zombie's Suburban Almanac entry in Plants vs. Zombies.

His attack is the same as his Plants vs. Zombies: All Stars counterpart.

All-Star Zombie can be quite a menace to your opponent both defensively and offensively, as his

Armored 1 trait allows him to withstand attacks more efficiently, while his

Frenzy trait allows him to plow through weak plants and do damage to your opponent.

Since he is in the sports tribe, Team Mascot can increase his stats to make him survive longer and hit harder, while Zombie Coach can make him unable to be hurt for a turn. Ancient Vimpire can boost him every time he destroys a plant, although this combo can only be done by The Smash. However, he is still a great threat on his own, so he shouldn't have much of a problem fitting into many decks.

All-Star Zombie is a dangerous zombie, but there are a few ways to counter him. The easiest way is to play tricks. Stat-reducing tricks such as Water Balloons, Weed Whack, and Scorched Earth make him easier to deal with, while instant-kill tricks like Lawnmower, Squash, Shamrocket, and Doom-Shroom are more expensive, but can completely get rid of him. Otherwise, very few plants can reliably destroy him due to his immense bulk.

Retrieved from "https://plantsvszombies.fandom.com/wiki/All-Star_Zombie_(PvZH)?oldid=2286134"
Community content is available under CC-BY-SA unless otherwise noted.