For the version in Plants vs. Zombies Heroes, see All-Star Zombie (PvZH).
For other uses, see Football Zombie (disambiguation).

A heavy-duty zombie who charges your defensive line.

Flighty, then Stiff (after tackle)

(with Plant Food only)

Modern Day - Day 21
All-Star Zombie is a third-round draft pick and shows a lot of promise, but come on, his salary demands are beyond ridiculous. Ten million brains per year? For FIFTY YEARS?

All-Star Zombie is the fourth zombie encountered in Modern Day in Plants vs. Zombies 2. Upon entering the lawn, All-Star Zombie lunges at full speed and tackles the first plant he meets; however, if he dies before tackling the plant, the player will get an achievement. Upon a successful attempt, the tackle deals an equivalent of a Gargantuar's smash. After tackling the first plant, All-Star Zombie's speed will be reduced, and he will eat any plants he comes in contact with, like most other zombies. Additionally, if All-Star Zombie comes into contact with a Super-Fan Imp, he will kick the Super-Fan Imp into any column past the fourth column.

A heavy-duty zombie who charges your defensive line.

Damage: charges like a flighty zombie upon entering the lawn and destroys the first plant he meets
Special: slows down and becomes a stiff zombie after tackling a plant

All-Star Zombie is a third-round draft pick and shows a lot of promise, but come on, his salary demands are beyond ridiculous. Ten million brains per year? For FIFTY YEARS?

As All-Star Zombie's tackle is equivalent to a smash from a Gargantuar, any wall capable of resisting Gargantuar attacks such as Primal Wall-nut should be effective against All-Star Zombie. Using a Lava Guava is also effective, as the tackle will just trigger the Lava Guava, with the added bonus of leaving a lava puddle. Plus, because of the stiff speed of All-Star Zombies after tackling, this zombie will receive a lot more damage from the lava puddle than zombies that move at a normal speed. Despite in most cases, Ghost Pepper will be defeated if an All-Star Zombie comes in contact with it, so it is not recommended to use Ghost Pepper in levels with this zombie.

Iceberg Lettuce and Stallia are effective in taking away the All-Star Zombie's charge, as they can still give out its slowing effect when absorbing the zombie's tackling attack when they are hit. Furthermore, they have a cost of zero sun.

Keep in mind, unlike Football Zombie, All-Star Zombie's football helmet cannot be pulled off by a Magnet-shroom, so avoid using it as a counter for All-Star Zombies, as it will be a total waste of a seed slot.

Some instant-use plants will trigger him to tackle. Squash will force a tackle if placed in front of him, as well as Potato Mine and Primal Potato Mine.

Infi-nut's force field can absorb up to ten tackles since it can absorb ten smashes from Gargantuar. This is because each tackle damages the same as a smash, so remember to use it.

Note: Close-range plants like Bonk Choys, Snapdragons, Wasabi Whips, and Phat Beets are useless as All-Star Zombies can reach them fast and destroy them and barely take any damage. Also, do not to use Chili Beans, Garlic, Shadow-shrooms, Sun Beans or Hypno-shrooms when All-Stars are charging as they can destroy them without being affected. 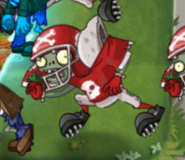 All-Star Zombie about to tackle a Primal Wall-nut 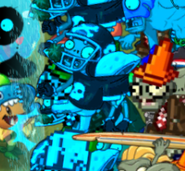 A fainted All-Star Zombie standing on top of flowers 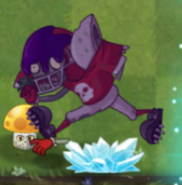 All-Star Zombie being dragged by a Grimrose 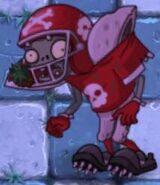 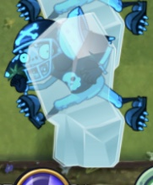 An All-Star Zombie inside a Frozen block 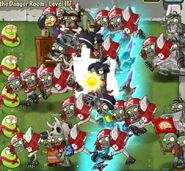 Almanac entry
Add a photo to this gallery

Retrieved from "https://plantsvszombies.fandom.com/wiki/All-Star_Zombie?oldid=2171131"
Community content is available under CC-BY-SA unless otherwise noted.