All-Stars are the zombie team defender. They can provide dummy shields for safe firing, or suppressing fire to keep enemies at bay.
All-Star is a playable Zombie class in Plants vs. Zombies: Battle for Neighborville. He is a

All-Stars are the zombie team defender. They can provide dummy shields for safe firing, or suppressing fire to keep enemies at bay.

All-Star's primary weapon is the Football Cannon, which fires footballs that deal 7 damage each (8 for crits) and fires at a rate of 570 RPM (rounds per minute). All-Star is slower and cannot jump while firing the Football Cannon. To compensate for this, it has infinite ammo (firing for too long can cause it to overheat though). After overheating, All-Star cannot fire the Football Cannon for a short amount of time. There is a short delay before and after firing as the Football Cannon needs to spin up/stop spinning.

All-Star is the zombie team tank, as he has the most health out of all the zombies (besides a Z-Mech or a docked Space Station). All-Star excels at defending objectives, teamates and winning 1-on-1s with his Dummy Shield and high health and power. The Football Cannon can do excellent damage, especially at a close to mid-range, but do remember that it takes about a second for All-Star to charge the cannon and begin firing. All-Star functions great on his own or with a group.

Combining the upgrades Health Regeneration and Health Regeneration Delay makes for a great combo on All-Star. With them, if he starts to become injured, he can quickly hide or take cover in a Dummy Shield and regenerate all of his health very quickly, allowing him to swiftly get back into action. Supercharged Football Coolant is also a good choice, especially in Graveyard Ops, as it allows him to take out hordes of enemies without worrying about the weapon overheating as quickly.

Proceed against All-Star with extreme caution. He has a decently powerful primary weapon, Imp Punt and Sprint Tackle to devastate Plants at close range, and his Dummy Shield to hold ground and protect himself as well as his teammates from long-range attacks. Essentially, All-Star is a very difficult target, with his powerful tools and higher than average health, but he doesn’t fare particularly well against groups of plants. He relies on his allies to dispel groups, as his Imp Punt isn’t the best at crowd control due to its unpredictable physics. Typically, it’s best to attack an All-Star with a group of plants backing you up, especially if you’re a small, weak plant like Acorn or Nightcap. All in all, All-Star can be quite dangerous to attack head-on, due to his close-range dominance, but his weaknesses become glaring when attacked by a group. 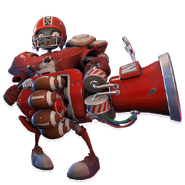 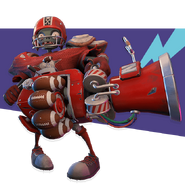 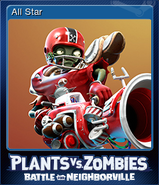 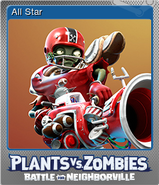 All-Star's full artwork
Add a photo to this gallery
Retrieved from "https://plantsvszombies.fandom.com/wiki/All-Star_(PvZ:_BfN)?oldid=2365293"
Community content is available under CC-BY-SA unless otherwise noted.