Rare
The ZIA maintains that there's no conclusive proof of alien plant life. They claim Alien Flower is just a hoax, or an urban legend. They want you to believe that her interstellar spacecraft is just a weather balloon... or maybe swamp gas? The ZIA asks that you please move along and forget this conversation ever happened.

Super Rare
The ZIA maintains that there's no conclusive proof of alien plant life. They claim Alien Flower is just a hoax, or an urban legend. They want you to believe that her interstellar spacecraft is just a weather balloon... or maybe swamp gas? The ZIA asks that you please move along and forget this conversation ever happened.
Alien Flower is a Rare variant of the Sunflower in Plants vs. Zombies: Garden Warfare and Super Rare in Plants vs. Zombies: Garden Warfare 2. She was added in the Legends of the Lawn DLC Pack.

The ZIA maintains that there's no conclusive proof of alien plant life. They claim Alien Flower is just a hoax, or an urban legend. They want you to believe that her interstellar spacecraft is just a weather balloon... or maybe swamp gas? The ZIA asks that you please move along and forget this conversation ever happened.

The primary weapon of the Alien Flower is the Spore Mist. It is a semi-automatic weapon with a 10 (15 in Garden Warfare 2) round clip that deals 10-14 impact damage and 15-17 critical damage based on distance and leaves spores in the air for a little while, dealing 3 (4 in Garden Warfare 2) damage every second for three seconds to zombies within a radius, dealing up to 12 extra damage per shot. Its bloom is low.

The Alien Flower weapon is unique compared to other Sunflowers as she deals splash damage in a way that no other plant except Toxic Citron does. The Alien Flower is ideal for players that like to assist other players in scoring vanquishes, rather than vanquishing enemies on their own. The Alien Flower's splash damage behaves in a way that gives the plant you assist some extra breathing room as even if they stop dealing damage to the zombies for a short moment, the spores that you fire can continue to deal damage, lowering the burden from allied plants.

In Gardens & Graveyards, the Alien Flower is great for bombarding the zombies with spores as they rapidly damage multiple zombies at a time in a wide area and can easily go unnoticed if the zombies are already fighting other plants, allowing you to lower your teammates' burden when the zombies are trying to group-rush the objective by dealing damage to the entire group, making it easier for your teammates to finish them off. Plus, since your teammates are the ones that vanquish, the post-vanquish "death cam" will likely not give away your presence or position.

Finally, you can give further support by healing of any damage sustained by your teammates once most of the fighting dies down. Alien Flower excels at harassing or even vanquishing multiple zombies standing on a garden in G&G, as it can keep constantly damaging the opponents even from afar, a very accurate Alien Flower could successfully defend a garden by themselves, without any help from their teammates, if there aren't many zombies on ground because of how much damage it could rank up.

The Alien Flower remains useful in Garden Ops due to the fact that her spores can damage groups of Spawnable Zombies significantly and they completely ignore the armor of armored zombies, making the Alien Flower wonderful at taking out Coffin Zombies, Outhouse Zombies and Barrel Pirates. This is also true for zombies that use shields (Screen Door Zombies and Newspaper Zombies) since the spores ignore shields as well, though the spore shots will not pass through the shield if it hits the shield directly but the resulting spore cloud will still harm both the shield and its user.

As for non-armored, yet tough zombies (like Buckethead Zombies), the Alien Flower should generally receive backup from Peashooters or Chompers since the Alien Flower does not have the power to vanquish these zombies as easily as other plants. If you're in a tough spot as the Alien Flower and running away is a must do in order to get some distance from any zombies swarming you, keep shooting the ground while running away, as the spores are going to damage any zombie that's behind you, potentially vanquishing them while you flee, if they do not get vanquished though, you will have just about enough distance from them after a short run to turn back and directly hurt them.

The Dark Flower is a very useful ability to have in order to compensate for the Alien Flower's below-average direct hit damage. Drop it down and stay near it, using it as a helpful damaging partner. Make sure to have another Sunflower with you though, as you will not be able to heal by yourself with the Dark Flower.

The Alien Flower is not to be underestimated. Her attacks and spores are able to dish out some major damage and Alien Flower becomes especially problematic when fighting in cramped corridors and other tight spaces. Use the same strategies you would use against a Peashooter, but avoid the spores, because they can do some light extra damage to you and they affect a larger area than the splash damage dealt by peas, which may be just enough to vanquish you.

Vanquishing her as quickly as possibly is recommended, as the spores can be incredibly annoying when fighting against other plants at the same time. Given the spores' large range of effect, the Alien Flower can potentially ruin a full-strength group-rush if the Alien Flower is supported by other plants since she can deal small amounts of additional damage to the whole group, making it all easier for her allies to finish you off. To make things worse, once the group is broken up and defeated, the Alien Flower can proceed to heal her teammates, allowing them to be ready at full health when you attack again.

The Alien Flower is at its most dangerous state if she gains the opportunity to attack you from a high vantage point while you are fighting other plants, since the spores can deal extra damage and since they do not inflict any status effects, they can easily go unnoticed when all focus is shifted to the attacking plant. 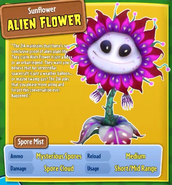 Alien Flower on the Legends of the Lawn billboard image