Alarm Arrowhead is an uncompromising activist. Every time a friend calls his name, he will emphasize: "I am Alarm Arrowhead, not Warning Sagittaria. I am different from those windbags!"

Alarm Arrowhead (警爆磁菇 ; pinyin: jǐng bào cí gū ) is a plant in the Chinese version of Plants vs. Zombies 2. He functions similarly to Squash, dealing large damage to a group of zombies in a one tile area, but with the added bonus of disabling nearby mechanical zombies similarly to E.M.Peach. However, he will only deal damage if he is in the same row or column as another Alarm Arrowhead.

Placing two Alarm Arrowheads on the same column or row will create a red line between them, similarly to Electric Currant and Icy Currant. If a zombie crosses the line, one of the Alarm Arrowheads will attack the zombie.

Alarm Arrowhead is based on the root of the Sagittaria sagittifolia plant, commonly known as the arrowhead.

Fires a blast of energy in the third row and third column from the right spanning 5x5 tiles, dealing high damage to zombies.

Now leaves a node of energy that deals damage to zombies in a 3x3 radius for 5 seconds.

Since this plant only activates on zombies between two Alarm Arrowheads in the same row or column, like Electric Currant, it would be a good idea to use Garlic or Sweet Potato to lure zombies into his range. His ability to disable mechanical zombies can come in handy in Far Future, or against other mechanical zombies like Zombie Bull or Robo-Cone Zombies. 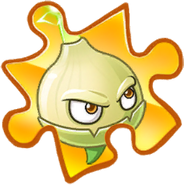 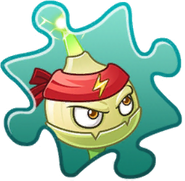 His reveal image, along with Holly Barrier

Retrieved from "https://plantsvszombies.fandom.com/wiki/Alarm_Arrowhead?oldid=2372919"
Community content is available under CC-BY-SA unless otherwise noted.