Ail-mints poison all zombies when planted and provide a temporary boost to all Ail-mint Family plants on the lawn.

Spending 100 mints
Ail-mint is quick to state that poison should not be taken internally. Or externally, for that matter. Really, just leave it alone. It's poison!

Ail-mint is a Power Mint plant in Plants vs. Zombies 2. When planted, it will poison all zombies on the board. It can also boost Ail-mint Family plants by increasing the effect of their abilities, whilst also boosting their toughness, damage and more whilst it is on the lawn.

Like other Power Mints, it cannot be imitated or affected by other mints. After 11 seconds, Ail-mint will disappear.

Ail-mint can be obtained with 100 mints in the Store when it is available.

Ail-mint is based on the "Lamiaceae" (also known as "mint").

Ail-mint's name is a pun on the word "ailment," meaning "An illness, typically a minor one." This is a reference to it boosting plants that plague zombies with harmful effects or use spores or fumes (which may or may not be toxic, but last a long time in the air nonetheless).

Ail-mints poison all zombies when planted and provide a temporary boost to all Ail-mint Family plants on the lawn.

Ail-mint is quick to state that poison should not be taken internally. Or externally, for that matter. Really, just leave it alone. It's poison!

Note that Ail-mint's recharge is 30 seconds shorter during the Improve-mint event.

Ail-mint by itself is a fantastic plant, as its ability poisons all zombies on screen when planted, which can very easily defeat all zombies on screen. Ail-mint's plant family is generally pretty weak, but there are a few plants that are effective, especially when boosted, including Fume-shroom, Spore-shroom, and Goo Peashooter. When boosted, these plants can easily wipe out large hordes of zombies, especially when combined with Ail-mint's poison effect.

Ail-mint isn't quite as effective in Far Future because of the high health of the zombies there, making them take a while to defeat.

Remember that it's not advised to bring Power Mints into "Don't lose more than X plants" levels, as it will disappear after a while. 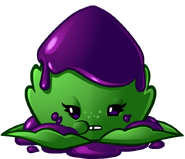 Ali-mint's seed packets in the store 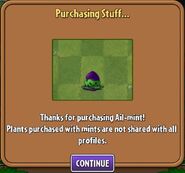 Ali-mint ready to level up 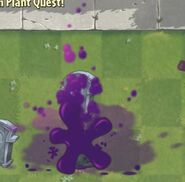 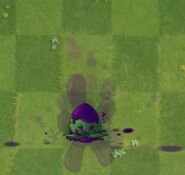 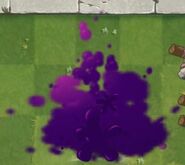 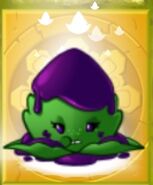 Ail-mint on a Gold Tile

Ail-mint's Endless Zone card
Add a photo to this gallery

Retrieved from "https://plantsvszombies.fandom.com/wiki/Ail-mint?oldid=2211705"
Community content is available under CC-BY-SA unless otherwise noted.