For the version in Plants vs. Zombies: Journey to the West, see Aggro Brocco (PvZ: JttW).

Aggro Brocco waves zombies attacking in the front and rear.

Aggro Brocco once dreamed of becoming a superhero, just like the ones he saw on the comic books he read. For this he rejected the proposal from the cute tomato, joined the judo club in his school, training his martial arts in his lessons and after school... And finally, he received his retention letter.

Aggro Brocco (大力花菜; pinyin: dàlì huācài) is a plant in the Chinese version of Plants vs. Zombies 2. He picks up zombies using a suplex and throws them onto the ground, dealing 200 damage per shot. He can do this twice in a row before having to rest for 15 seconds. He can also work as a defensive plant. 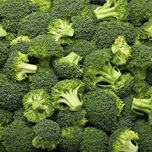 Aggro Brocco is is based on broccoli, an edible green plant in the cabbage family (family Brassicaceae, genus Brassica) whose large flowering head and stalk is eaten as a vegetable.

His Chinese name, "大力花菜", translates to "Vigorous Cauliflower", despite his appearance being based on a Broccoli. This is because "cauliflower" and "broccoli" share a word in Chinese.

His name is a combination of the words "aggro" (a short form of the word "aggressive" or "angry"), referring to his ability and "brocco", the real-life plant his Plants vs. Zombies 2 appearance is based on (in which the word "li" was intentionally removed for rhyming purpose).

When given Plant Food, he pulls a nearby zombie to him, tussles it, and flings it off the screen.

When fed with Plant Food, he does his same old Plant Food effect but will proceed to toss the zombie back at others when finished tussling.

Retrieved from "https://plantsvszombies.fandom.com/wiki/Aggro_Brocco?oldid=2333226"
Community content is available under CC-BY-SA unless otherwise noted.