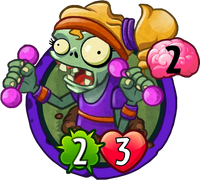 Start of Turn: All Dancing Zombies get +2

.
Aerobics really bring the dead to life.
Aerobics Instructor is a premium super-rare zombie card in Plants vs. Zombies Heroes and a member of the

. She does not have any traits, and her ability gives all dancing zombies on the field, including her, +2

In the boss battle of the mission Disco Inferno!, Electric Boogaloo starts with an Aerobics Instructor on the third lane.

This zombie alone can become powerful if protected and kept alive for several turns, but where this zombie really shines is in dancing decks. With a big enough swarm of zombies constantly gaining strength, you can defeat your opponent pretty quickly. But the downside is that most dancing zombies have low health, and the Crazy class lacks health-boosting cards. To cover that, you could either flood the field with so many zombies your opponent cannot handle all of them at once or use high-health dancing zombies. Disco Zombie is a good way to swarm, as playing him will result in two zombies; Disco-Tron 3000 is better in terms of swarming, but you must delve into the late game in order to synergize it with Aerobics Instructor. As for high-health dancing zombies, Jester and Headhunter are two fine examples in the Crazy class.

Z-Mech has arguably the best use of Aerobics Instructor, as he can use mass health-boosting cards to keep her and other dancing zombies alive for longer. A good example of a boosting card would be Camel Crossing. He can also use Bonus Track Buckethead to his aid as well, as not only is he in the dancing tribe, he can stop bonus attacks from destroying your zombies before they can attack. He also has a good amount of health and the

Armored 1 trait, which lets him gain strength safely for many turns.

Impfinity might not have anything that can boost survivability, but he does have Line Dancing Zombie, who has decent strength and a moving ability that lets her move onto a safe lane. She will be able to do at least 8 guaranteed damage to your opponent if she moves onto an empty lane.

Aerobics Instructor can become a real threat if your opponent swarms many dancing zombies; the more Aerobics Instructors there are, the worse for you. While you could remove the other dancing zombies, it is better to destroy her first to stop the other zombies from being boosted. Play cards that can instantly destroy her like Berry Blast, Meteor Strike, and Whack-a-Zombie.

Retrieved from "https://plantsvszombies.fandom.com/wiki/Aerobics_Instructor?oldid=2360766"
Community content is available under CC-BY-SA unless otherwise noted.