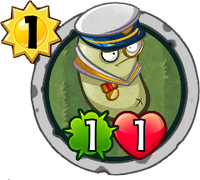 For other uses, see Bean.

When you play a Bean, do 2 damage to the Zombie Hero.
"Heavy is the weight of my command. And my cap. Heavy is the cap."

Admiral Navy Bean is a premium rare plant card in Plants vs. Zombies Heroes, and a member of the

. It has the Team-Up and Amphibious traits, and its ability does 2 damage to the zombie hero every time a bean card, excluding it, is played. This ability stacks with each Admiral Navy Bean on the field, and persists until all Admiral Navy Beans are removed from the field. His zombie counterpart is Headhunter.

It is based on an admiral, the rank of the highest naval officers, and a navy bean, a variety of white bean.

"Heavy is my weight of command. And my cap. Heavy is the cap."

This has exactly the same stats, cost, tribe and class as Weenie Beanie. However, it is a very useful plant to have due to its Team-Up and Amphibious traits, and most importantly, its ability.

Because its ability activates every time you play any bean card, it is recommended to bring many beans in your deck, including itself. What's even more amazing is that all Admiral Navy Beans on the field will activate their ability for every bean card played, which can result in wreaking some serious havoc to your opponent when stacked.

Admiral Navy Bean's ability can also be cleverly used to trigger a block when your opponent's Super-Block Meter is almost full for an even more powerful hit to come, without the risk of being blocked.

You can also use its traits to good use. You can play it on turn 1 on an aquatic lane to keep it safe and untouchable from most cards except for Template:PvZHLink, Template:PvZH Link, and damaging/destroying tricks, or use it to act as a shield to protect a powerful plant.

Admiral Navy Bean is extremely devastating if your opponent plays many beans, and since its ability activates for every Admiral Navy Bean, doing so with more Admiral Navy Beans can defeat you very quickly. However, Admiral Navy Bean has very low stats, so it should be easy to destroy, as almost any zombie or damaging trick can destroy it. Even if you already took the damage, it can prevent you from taking even more damage later on by not letting it survive.

Using any damaging/destroying trick or ability can get rid of it instantly. Fireworks Zombie, Barrel of Deadbeards, Weed Spray, and The Chickening are excellent cards to play when many of them are on the field at once, provided their health hasn't been boosted at all (or to 3 if you're playing The Chickening) for damaging tricks or their strength has not been boosted to 3 if you are using Weed Spray or Rocket Science.

Retrieved from "https://plantsvszombies.fandom.com/wiki/Admiral_Navy_Bean?oldid=1959267"
Community content is available under CC-BY-SA unless otherwise noted.