For the form in Plants vs. Zombies: All Stars, see Admiral Helmet Zombie (PvZ: AS).

Only shows up in Endless Challenge

Kongfu World - Endless Challenge
Being appointed as admiral is an unimaginable glory to Kongfu Zombies.

Only shows up in Endless Challenge

Kongfu World - Last Stand I
Rushes to the frontlines with the admiral helmet.
Admiral Helmet Zombie (元帅僵尸; pinyin: yuánshuài jiāngshī) is a zombie encountered in Kongfu World in the Chinese version of Plants vs. Zombies 2. Like Knight Zombie, Blockhead Zombie and Jurassic Fossilhead , they have no unique abilities, however it can absorb tons of damage from plants with its admiral helmet.

It used to only appear when a Monk or Kongfu Zombie got an admiral helmet from a Weapon Stand, but now can appear normally in Kongfu World's Endless Challenge.

Because this zombie's health is similar to Knight Zombie, Blockhead Zombie, and Jurassic Fossilhead, you must have powerful plants in your arsenal. Use plants like Winter Melon, Citron, and Melon-pult to effectively counter the zombie. Also for more effect you can use stunning plants like Iceberg Lettuce and Stunion, so you can stop it from causing trouble. Magnet-shroom can steal the zombie's helmet and reduce it to a regular zombie. Instant kills, such as Cherry Bomb, Chili Bean and Jalapeno can defeat it easily.

An Admiral Helmet Monk Zombie on the lawn

An admiral helmet Weapon Stand on the lawn 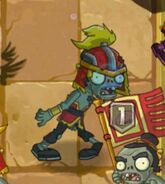 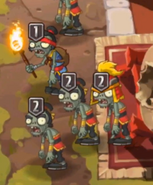