Team up to launch Super Sap Traps and more with Oak & Acorn. Log tree-mendous vanquishes with this mighty pair.
Acorn is a playable plant class in Plants vs. Zombies: Battle for Neighborville and is the plant equivalent of the Space Cadet. He is a

Defend class who specializes in team-ups and group attacks.

He can attack solo and function as a fast moving scout class, transform into an Oak and operate as a slow-moving explosive class, or ride on top of an Oak as an Acorn Passenger and function as a playable mounted-turret.

Acorns work best when they attack in groups. Transform into Oak, and load up with Acorn passengers who'll get increased firepower and survivability.

Acorn's primary weapon is the Shell Shot, which rapidly fires wood chunks, each chunk dealing 6.6 damage each (8 critical). Can fire 45 times before needing to reload.

Acorn Passenger's primary weapon is the Treetop Turret, which fires wood chunks, but each chunk only deals 4.6 damage (6 critical) and fires at a rate of 800 RPM (rounds per minute). To compensate for the reduced damage, Treetop Turret has infinite ammo. It can't be fired for too long though, as it can overheat (similarly to the All-Star's Football Cannon).

As an Acorn Passenger, you can make an Oak much more dangerous. Acorn can attack zombies that the Oak is ignoring or add up extra firepower against the same target. Use Lumber Support to keep an Oak in the fight longer and to prevent you, the Oak, or any other passengers unrevivable. Getting three Passengers on a single Oak can make the Oak a lot tankier.

However this doesn't make you invincible. Acorns can take damage while riding an Oak and even be vanquished before the Oak itself, so make sure to use your Lumber Support to heal yourself as well as Oak so you can keep riding and supporting it. 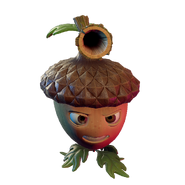 A full body render of Acorn 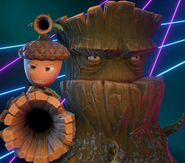 Acorn in-game along with Oak 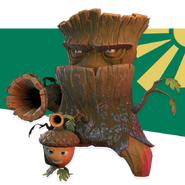 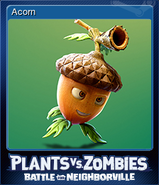 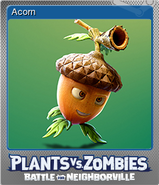 Another set of concept model renders of the Primordial Nut skin. 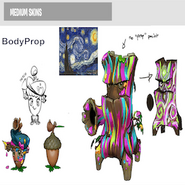 Concept art of the scrapped Color Me Impressed skin. 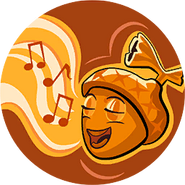