For other uses, see achievements.

In Plants vs. Zombies, the player can earn achievements by completing their respective actions. Because of this, some achievements cannot be achieved on certain levels or modes of the game. Achievements appear in almost all versions of the game, with the only exceptions being the original PC version and the online version.

The sound when earning an achievement (except in the Nintendo DS and DSiWare versions).

These achievements were originally going to be added to the PC version of the game, but got scrapped.

Added in the Game of the Year Edition

These Achievements were added to the Game of the Year Edition.

There are a total of forty-seven (forty-eight in the iPad version) achievements for the iOS versions of the game.

There are a total of twelve achievements on the Xbox Live Arcade and PlayStation Network versions. On the leaderboards screen, one will see that Crazy Dave puts lawn ornaments on the lawn of his or her leaderboard house upon obtaining each achievement of the game.

Added in the Nintendo DS version only

There are a total of forty-eight achievements for the Android version. The Nook version only includes ten achievements.

Android and Kindle Fire only 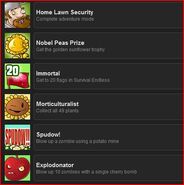 Some of the PC achievements on Steam from 2009

Lex from Bookworm Adventures and the Zombie Worm

A green chuzzle from Chuzzle

The skeleton of Bjorn and some pegs from Peggle Nights

A pipe (no reference)

Baron Digo and some Zuma balls from Zuma's Revenge

After having dug past the core of the earth, you end up on the other side of the world with Jiang Shi (Chinese zombies) roaming in China

All icons of the achievements (GOTY PC) 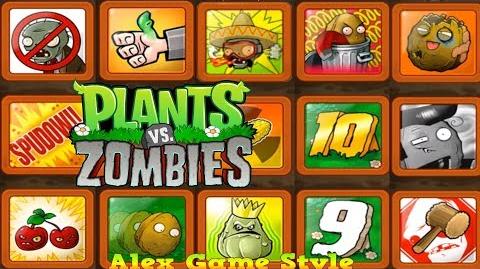