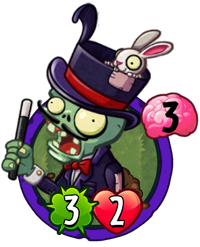 When this hurts the Plant Hero, do 3 damage to a random Plant.
Keeps forgetting that the magic word is "Please."

Abracadaver is a premium super-rare zombie card in Plants vs. Zombies Heroes and a member of the

. He has the Gravestone trait, and his ability does 3 damage to a random plant every time he does damage to the plant hero.

In the mini-boss battle for IMPfestation Ahead!, Impfinity starts with an Abracadaver on each ground lane.

He is based on a magician, a person who practices and performs magic, one of the oldest performing arts in the world where the audiences are entertained by stage tricks or illusions.

The rabbit on his top hat is a reference to the famous "Pulling a rabbit out of a hat" magic trick.

His description references the phrase, "What's the magic word?" In this case, the magic word is "Please." This could be a reference to the parenting trick used to teach young children to be polite.

Keeps forgetting that the magic word is "Please."

This zombie can potentially be very dangerous, hitting both the hero and a random plant, which could be essential to the opponent's strategy, and possibly destroy that plant before it has a chance to attack. But to do that, Abracadaver must damage the hero. Due to his low health, it is recommended to destroy, move, or Bounce any plant that separates Abracadaver from any plants in the same lane, then watch him wreak havoc. Bungee Plumber, Cakesplosion, and The Chickening are all good candidates for removing plants.

Abracadaver is also a good candidate for Moon Base Z, since he will have the

Overshoot trait, allowing his ability to activate immediately and possibly destroy the plant in front of him.

Each hero has their own way of using Abracadaver well with their other class:

A good zombie to bring along with Abracadaver would be Jester, since they function very differently from each other (Jester needs to be hurt while Abracadaver can't afford to be hurt) and thus requiring different counters to take them out efficiently, resulting in some mind games; your opponent may play a weak plant that can damage Abracadaver to prevent their plants from taking 3 damage, only to find out it was Jester.

Since this zombie comes from a gravestone, Grave Buster can be used. If he comes out, Sour Grapes, Kernel Corn, or any damaging plant or trick is also a great counter to this zombie. Whipvine or Sweet Potato can move Abracadaver into a lane with a plant that can dispose of him. He is not that hard to defeat due to his incredibly low health, so he can easily be defeated by any plant that deals damage.

However, what makes it difficult to defeat is his Gravestone trait. Because of the many 3-brain Gravestone zombies in the game, it can be unpredictable whether to use a plant against the gravestone, or have it end up something like Jester or Smelly Zombie. Making the wrong choice can take out key plants in strategy like Black-Eyed Pea, Mayflower, and Lily of the Valley.

A way to help negate Abracadaver's ability is to use either Peel Shield or have Soul Patch on the field.

Retrieved from "https://plantsvszombies.fandom.com/wiki/Abracadaver?oldid=2192498"
Community content is available under CC-BY-SA unless otherwise noted.