Professor Brainstorm is teaching zombies how to eat more brains. Green Shadow, Spudow, and Grass Knuckles attempt to stop him, but things get complicated when the mad scientist summons zombie reinforcements. However, Spudow throws his head onto the teleporter, and Professor Brainstorm is seen punished for his actions by writing on the chalkboard not to teach zombies to eat brains.

The first comic strip when the player starts the mission 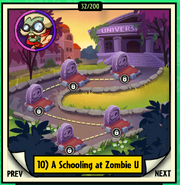 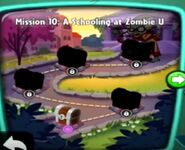 A Schooling at Zombie U's map in the 1.0 update
Add a photo to this gallery

Retrieved from "https://plantsvszombies.fandom.com/wiki/A_Schooling_at_Zombie_U?oldid=2307542"
Community content is available under CC-BY-SA unless otherwise noted.