Impfinity, The Smash, Grass Knuckles, Chompzilla, Wall-Knight, Nightcap, and two other zombies participate in the "Fighting Flora Obstacle Race" where Grass Knuckles has the lead. Impfinity then uses his cloning ability to win the race. 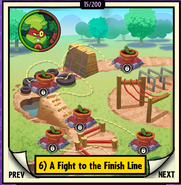 A Fight to the Finish Line's map locked

Dr. Zomboss telling the player about the Boss Battle's special gimmick
Add a photo to this gallery

The third comic strip
Add a photo to this gallery

Retrieved from "https://plantsvszombies.fandom.com/wiki/A_Fight_to_the_Finish_Line?oldid=2371044"
Community content is available under CC-BY-SA unless otherwise noted.