Rare
AC Perry is the Rare ice variant of the Engineer in Plants vs. Zombies: Garden Warfare 2. His appearance is looks like to be an air-conditioning repairman, as he has a fan gun as his primary weapon and carries an AC on his back. He was first revealed on the Twitter page on December 20, 2015. Like all ice variants, AC Perry slows down plants that he hits using his primary attack, and if AC Perry shoots a plant enough times, they will freeze in place. His weapon is fully automatic and has double the rate of fire, but at the expense of some damage. After a plant is shot directly four times, the plant will be frozen.

The Sonic Grenade is a grenade that, when thrown, will stun plants in a small radius for a short time and forces burrowing Chompers out from the ground.

An alternate ability of the Sonic Grenade, the Proximity Sonic Mine is a landmine which can stun plants for about five seconds when stepped on and makes Chompers come out of their burrow. This can be very useful for defending a teleporter or trying to escape from plants.

The Jackhammer allows for quicker movement.

An alternate ability of Jackhammer, the Turbo Jackhammer travels faster, but lasts for a shorter amount of time.

The Big Bolt Blaster is a mounted turret similar to the Pea Gatling. It has 100 ammo and a very high rate of fire. 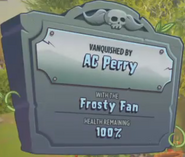