80s Action Heroes are all about explosions. Explosions from afar, from above, from behind cover, and even where they were standing.
80s Action Hero is a playable zombie class in Plants vs. Zombies: Battle for Neighborville. He is an

80s Action Heroes are all about explosions. Explosions from afar, from above, from behind cover, and even where they are standing.

80s Action Hero's primary weapon is the Bow Blaster, a powerful bow that increases in damage and accuracy depending on how long the 80s Action Hero charges it. While charging, 80s Action Hero moves at slightly reduced speeds. It has 3 charges. The first charge fires 5 projectiles in a flat horizontal line, dealing 25 damage if they all hit 1 target (35 critical). The second charge fires 3 projectiles when released, dealing 40 damage to a single target (56 critical). The third charge (fully charged) fires 1 big projectile that deals 65 damage (75 critical) along with splash damage. In additions, shots also carry a tag effect, which correlates with Can't-Miss-ile; each shot that hits an enemy counts as one tag, with up to three tags that can be applied to an enemy. The Bow Blaster does not use any ammunition, nor does it overheat.

The 80s Action Hero is an offensive sniper; meaning that while he does need to hang back at range, he is used best to push up to vantages points and rain destruction down on defending plants. To play the 80s Action Hero, you need to be accurate enough to hit your shots, and smart enough to know when to retreat, when to push and when to wait for team support. All his abilities support his offensive playstyle - his Can't-Miss-ile to effectively eliminate single targets, his Dynamite Dodge can save him in a sticky situation and force the attacking plant or plants to evacuate and his Rocket Ride is great at dealing with large groups of plants, or single, large targets like Oak.

The 80s Action Hero shines at range, with his charge-up Bow Blaster able to deal large amounts of damage at full charge. He is able to quickly vanquish targets on the opposing team, and, due to his above-average health, is able to escape a sticky situation by dropping his Dynamite Dodge and running away, relatively unscathed. At range, the 80s Action Hero experiences some trouble, as an un-charged Bow Blast deals little damage, barely enough to finish off an enemy on low health. Unless the close-up attacking plant is on extremely low health, try to charge up your shots as much as possible, because this will greatly increase your damage output. In a situation where an enemy plant in being aggressive towards you, panic can sometimes take over and un-charged shots are fired at it. Try to take your time and charge up your weapon to deal with the threat. If your health is decreasing too quickly, drop a Dynamite in their face and run.

Due to the new ability to sprint that all plants and zombies now have access to, enemy plants that are being shot at often sprint away before you can finish them off. Keep your Can't-Miss-ile ability ready for these situations, as if it is fired in time, it can vanquish the fleeing plant before it has a chance to reach cover. While the Can't-Miss-ile works best at finishing off plants hit by a charge of your bow blaster, don't be afraid to fire it at a plant with low health that you have not yet hit. It is much quicker to fire your missiles than to try and charge up a shot. In any situation, try to save the Can't-Miss-ile ability for when a plant is trying to retreat and regenerate their health, as you do not have much capability to finish them off without it.

Try using your Rocket Ride against numerous targets. While it may be tempting to fire all the rockets at one target, this is usually ineffective unless the target is a dangerous player, like an Oak with numerous Acorn passengers. Firing your rockets into a crowd of defending plants is a great way to support your team, forcing them to abandon the objective to regenerate health or risk being gunned down by zombies with little health they have remaining. Be aware that this ability forces your to remain stationary and suspended in the air, so try use it in a position that the enemy will not expect you to, to reduce the risk of counterattack by Cacti or other classes. Cacti are the most dangerous when using this ability, as you are an easy target for a fully charged headshot. Eliminate any threats to your rocket ride before firing rockets into an enemy crowd to make the best use of this ability, and to force plants to scatter off the objective, leaving it open for your team to capture.

In short, the 80s Action Hero is very good at clearing out objectives, either from the concentrated fire of his Bow Blaster or the crowd-effecting Rocket Ride. With a good enough aim, an 80s Action Hero can become one of the best at taking objectives in the game.

Even though 80s Action Hero is good at clearing out enemies, one thing he's not good at is close-range combat. Like mentioned above, he is an offensive sniper, so his weaknesses are closely resembling a sniper's weaknesses. Plants like Chomper or Citron are one of the best to use, since the 80s Action Hero lacks in short-range combat. His Bow Blaster does barely any damage uncharged, and charging it up will leave you in a vulnerable position. However, you must watch out if you get close, as many 80's Action Heroes have a tendancy to Rocket Ride the moment a plant comes too close. Always proceed carefully when going to attack him in close quarters.

If he does manage to land a hit on you and get tags, the best option is to hide behind cover. Hiding behind cover negates the tracking of the missiles from Can't-Miss-ile. If he goes in Rocket Ride, try to get headshots on him, since he will be in a stationary position, easy for you to get shots on. If you hide directly below his Rocket Ride , he cannot damage you with it.  Be careful, though other zombies can still hurt you, and he might use Dynamite Dodge on you once the Rocket Ride is over. 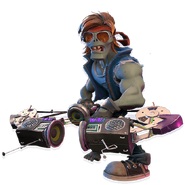 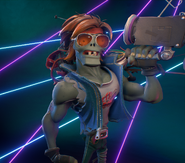 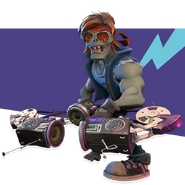 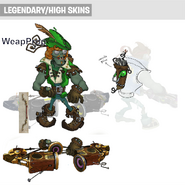